The word caulking does not only refer to the work around the windows.

Home / Info Caulking Greater Montreal / The word caulking does not only refer to the work around the windows.

If today the term “calfeuting” evokes the action of sealing doors and windows, historically the term has applied first to the manufacture and repair of boats, then in boilermaking… a look back at the history of the term.

Caulking is both the process and the material (also called sealant) used to seal the joints in various structures and certain types of piping. The oldest form of caulking is used to make the seams of wooden boats waterproof and steamproof. Fibrous materials are pushed into the wedge-shaped seams between the boards. A related process was once used to connect parts of cast iron sewer pipes.

The same term also refers to the application of flexible sealing compounds to fill voids in buildings and other structures resistant to water, air, dust and insects, such as doors and windows. Caulking is also useful as a component in firebreaks. In the tunnel digging industry, caulking is based on sealing of joints in prefabricated and segmental concrete tunnels, usually using concrete.

Historical uses of the word caulking

The dried caulking on the Severn Spry trowel is now on display on the ground.

A caulking mallet, a tar pot and a piece of petrified tar were found in Mary Rose’s 16th century car.

Traditional caulking applied to wooden containers requires cotton and oak fibres (hemp fiber dipped in pine tar). These fibres are pressed into the wedge-shaped joint between the planks, using a caulking mallet and a large scissor-shaped tool called caulking iron. The caulking is then covered with putty in the case of hull or deck joints with molten pine pitches, during a calibration process.

The modern marine sealant is frequently used in place of the field, or even to replace the oak and cotton itself.

In the construction of steel or iron riveted vessels, caulking consisted of making the seals watertight by inserting a thick, blunt scissor-shaped tool into the veneer adjacent to the joint. This had the effect of moving the metal in a tight fit with the adjacent piece. Originally, pneumatic tools were used. With the advent of arc welding for shipbuilding, the caulking of steel ships has become obsolete.

Iron and steel caulking, of the type described above for ship hulls, was also used by boilermakers during the riveted boilers to make the seals water and steamproof.

Modern use in construction

The verb caulking may refer to the caulking substance or the application process. The term caulking has spread to the construction sector, i.e. the activity of filling joints and voids in buildings. The function of caulking is to providethermal insulation of doors and windows,to control water penetration and to reduce noise.

Silicone-based caulking is also used for bathroom seals. The plumber gently spreads it around the edge when the sink is turned over, providing perfect sealing when installed in its final position.

This is mainly done with ready-to-use construction chemicals sold such as caulking, silicone, polyurethane, polysulfide, polyurethane and acrylic sealant. 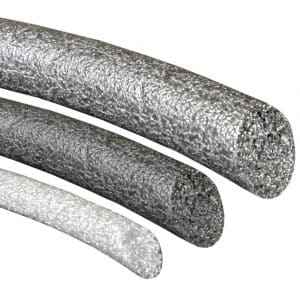 The rear wand, or joint bottom, is a soft foam product used behind the caulking to ensure the elasticity of the sealant and control the depth of the sealant.

The rear rod acts as a tiebreaker to prevent caulking from sticking to the bottom of the aperture, which is called a three-sided caulking.

The dorsal stems can be used to reduce caulking consumption by filling part of the joints.

The rear stem is often round in shape, but many specialized formats such as square, rectangular and D-shaped are available on the professional market.

High-temperature support bars are also available. They are available in polyethylene as well as polyurethane and have several widths. The dorsal stem is accessible in open-cell, closed-cell foam.

Open cell foam is porous and allows gases to pass through that could cause blisters.

In addition, the open cell rod allows air to reach the back of the sealant, which accelerates hardening when used with hardened sealants such as silicone. The open alveoli stem is more compressible than the closed alveoli foam and should have a diameter 0.25 larger than the joint.

A profession and uses that have evolved.

The caulking work therefore has many aspects and multiple reasons for existence. Construction is now the most common landmark, what will happen in the future?

Nearly 30% of energy leaks for heating are due to air infiltration. To reduce the heating bill, there are many solutions. One of them is the … END_OF_DOCUMENT_TOKEN_TO_BE_REPLACED

To guarantee the comfort of life in a building, it is sometimes necessary to install a thermos glass. This device makes it possible to balance the … END_OF_DOCUMENT_TOKEN_TO_BE_REPLACED

To optimize the thermal comfort of your home, it is essential to limit energy losses and moisture infiltration. To achieve this, it is important to … END_OF_DOCUMENT_TOKEN_TO_BE_REPLACED

Is the caulking of your window worn out? It would be interesting to replace it with another. At stake is the optimization of the isolation of your … END_OF_DOCUMENT_TOKEN_TO_BE_REPLACED

As winter approaches, it's important to be well prepared and have a properly insulated home. In this condition, you will not have to work your boiler … END_OF_DOCUMENT_TOKEN_TO_BE_REPLACED

A dwelling with good insulation is a dwelling where comfort and security reign. Good thermal insulation prevents cold from entering your home during … END_OF_DOCUMENT_TOKEN_TO_BE_REPLACED

The waterproofing of buildings is of great importance. Different materials are used as insulation for homes. In Greater Montreal and many other … END_OF_DOCUMENT_TOKEN_TO_BE_REPLACED

The waterproofing of buildings is of great importance. Different materials are used as insulation for homes. In Greater Montreal and many other … END_OF_DOCUMENT_TOKEN_TO_BE_REPLACED

Because of their many advantages, thermos windows are popular in many Canadian homes. Indeed, these windows offer better thermal insulation and … END_OF_DOCUMENT_TOKEN_TO_BE_REPLACED

Like all openings, the front door is an access for fresh air and noise. It is therefore necessary to ensure that it benefits from very good sound and … END_OF_DOCUMENT_TOKEN_TO_BE_REPLACED

Caulking a condominium is a maintenance point that you should think about most often. When you acquire newly or already live in a condominium, you … END_OF_DOCUMENT_TOKEN_TO_BE_REPLACED

You are very often bothered by the presence of fog on your windows and you do not know how to get rid of it. Well! This is a problem due to … END_OF_DOCUMENT_TOKEN_TO_BE_REPLACED

A type of polymer exploited in solid or foam format, polyurethane has won the hearts of people looking for effective, durable and manageable … END_OF_DOCUMENT_TOKEN_TO_BE_REPLACED

Caulking is a technique used to strengthen the tightness of open spaces in a house. The purpose of this operation is to prevent the entry of heat, … END_OF_DOCUMENT_TOKEN_TO_BE_REPLACED

In recent years, more and more households have been experiencing problems of heat loss. As a reminder, it is more precisely all heat loss in a house. … END_OF_DOCUMENT_TOKEN_TO_BE_REPLACED